EASTERN AHEC at a glance

Founded in 1974, Eastern AHEC strives to fulfill its mission of nurturing current and future health care professionals throughout their careers in several ways, including health career pipeline programs and other student services, continuing education and professional development programs, practice support, and library services. Eastern AHEC’s three-story, 36,400-square-foot building in Greenville, North Carolina, opened in fall 2016. Specifically designed to support education and collaboration in health care throughout the community, the education center at the building is available to the community when not in use for Eastern AHEC programs.

With the purpose of strengthening health care in eastern North Carolina by nurturing current and future providers, Eastern AHEC strives to be the bridge between health care and education in their region of 23 counties by positively influencing health outcomes in the region and by adhering to their mission statement: “Eastern AHEC is an advanced resource for health care providers, from student to expert.”

Eastern AHEC also assists the community with conference planning and management. Their Education Center is perfect for board meetings, retreats, conferences, workshops, networking events, and more.

Eastern AHEC is a non-profit organization governed by a board of directors that includes representation from regional health care institutions, the community, and community college system. To maximize resources, Eastern AHEC is affiliated with the East Carolina University (ECU) schools of medicine, nursing, and allied health. They also work with dentistry, pharmacy, and public health programs at the University of North Carolina at Chapel Hill. 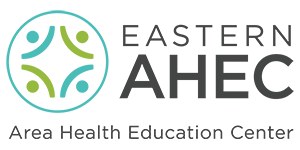