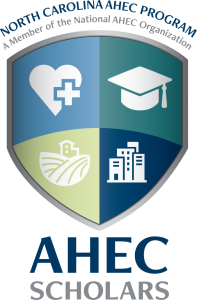 This fall, the first class of NC AHEC Scholars convened for the first time.

“The program is an extension of AHEC’s health careers pipeline and diversity programs, which help ensure that health care professionals reflect the diverse range of the communities they serve,” commented Jacqueline R. Wynn, MPH, director of health careers and workforce diversity and associate director of the NC AHEC Program. “NC AHEC Scholars will have the chance to meet leaders in health care and make connections with other participants, creating an invaluable network for their future careers in health care.”

With an emphasis on individuals from underrepresented minorities, disadvantaged and rural backgrounds, and first-generation college students, each of the nine Area Health Education Centers recruited students from community colleges, schools, and universities in their regions. Faculty from universities across the state developed modules on a variety of topics, from quality improvement to nutrition and obesity to ethics and technology. Each AHEC can work through these modules in the order that best fits their regional curricula.

Greensboro AHEC kicked off its inaugural NC AHEC Scholars Program with a diverse group of 15 students.

“We’re off to a terrific start,” shared Patricia Parrish, director of health careers at Greensboro AHEC. “As the scholars’ regional director, it has been exciting to see the program develop from planning to implementation, and I’m grateful for the entire team who helped turn the dream into reality.”

“We know that race and other cultural factors impact the way health care may be delivered and received,” explained Jacquelyn Hallum, director of health careers and diversity education at Mountain AHEC. “One of the aims of the NC AHEC Scholars Program is to increase diversity and cultural competency in the health care workforce so we can eliminate these health and health care disparities and help our scholars to be confident and competent in cultural fluency.”

At the Area L AHEC Scholars’ welcome, Dr. Bane of Barton College provided a presentation on emotional intelligence and discussed the different components of an emotional intelligence report, which the scholars participated in prior to the meeting. The students were invited to attend the Wilson County Health Summit in late September, when the Wilson County community health assessment was presented. Information from Edgecombe, Nash, and Pitt counties was shared as well as statewide information.

As a fun regional component, Area L AHEC is hosting several “Medicine and a Meal” events for their scholars’ group; the first event was with Dr. Stahl, the chief medical officer at Wilson Medical Center. They are also focusing on learning modules related to the value of the interprofessional team and an understanding of the current health care system—using the book Doctored: The Disillusionment of an American Physician, by Sandeep Jauhar, to learn about the good, the bad, and the ugly within health care from a doctor’s perspective.

Godgive Umozurike. an undergraduate public health studies student at ECU, is excited to be a part of the NC AHEC Scholars Program at Eastern AHEC. Godgive is on the path to earning her MD/MPH as an emergency medical physician. “I intend to utilize my background in public health to go beyond the examination room to understand social determinants of health in order to holistically treat my patients and increase the health literacy of underserved populations.” One of her long-term goals is to establish a system of traveling doctors, both domestically and abroad, who greater reflect and culturally relate to the populations they are treating.

Godgive said she was initially interested in the program because of the importance it places on representing minority groups. “This program places an emphasis on representing individuals who not only look like me but who possess an eagerness to strive for excellence and achieve their goals.”

Northwest AHEC’s 17 scholars are all undergraduates from Wake Forest and Winston-Salem State universities. On top of their didactic curriculum, Northwest AHEC is encouraging their scholars to attend a range of community events, including Wake Forest’s Share the Health Fair, a forum on the opioid epidemic, and the 2nd Annual S. G. Atkins Healthcare Legends of East Winston-Salem Awards.

South East AHEC and Charlotte AHEC rolled out their Scholars Programs this fall, as well, with 14 and 19 participants, respectively. Charlotte created an AHEC Scholars Facebook group where scholars can connect and start building an interprofessional network. Wake AHEC is actively recruiting scholars from local community colleges this fall and will launch their program in January 2019.

“I had such a wonderful experience yesterday at AHEC. Learning with other disciplines has already improved my skillset,” said Laurie McDuffie, a nursing student at Richmond Community College.

Morgan Gravley, a pharmacy student at Campbell University, said that learning about practice transformation during their first didactic session has opened her eyes to a world of interprofessional possibilities, which is, essentially, the whole point.

“The goal of the program is to create an interprofessional cadre of health professionals committed to service in rural and underserved North Carolina communities and to transforming health care in North Carolina,” Wynn reiterated. “Scholars will develop knowledge, skills, and abilities that will better enable them to practice in a transformative health care system that will be crucial to improving our state of health.”

More about the AHEC Scholars Program

The AHEC Scholars Program is part of the National AHEC Organization, which supports and advances the Area Health Education Center network to improve health by leading the nation in recruitment, training, and retention of a diverse health care work force for underserved communities. The NC AHEC Scholars Program is supported by a grant from the Health Resources & Services Administration. Visit ncahecscholars.net for more information about the program.

On September 18, 2015, Governor Pat McCrory signed the state budget bill which included legislation that will allow the NC AHEC Program to expand the ability of Mountain AHEC (MAHEC)…...

Mary Wilson, PhD, RN, at Eastern AHEC Named One of the Great 100 Nurses