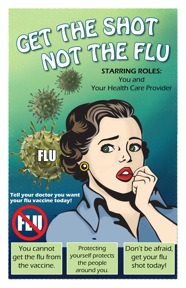 The flu shot won’t give you the flu. The flu shot protects yourself and the people around you. Don’t be afraid, get your flu shot today!

That was the message delivered to patients, age 65 and over, in The Family Medicine Center at Southern Regional Area Health Education throughout the 2014-15 flu season, as part of a four-pronged approach to increase the number of patients receiving the flu and pneumonia shot. A Senior Immunization Grant, one of only sixteen awarded by the Academy of Family Physicians Foundation (AAFP), provided support to implement a project aimed at improving influenza and pneumococcal immunization rates in patients age 65 and over.

The Centers for Disease Control and Prevention estimates that 90 percent of seasonal flu-related deaths and more than 60 percent of seasonal flu-related hospitalizations in the US each year, occur in people 65 years of age and older. In addition to having pharmacy students call designated patients to remind them to get their shot, holding regular flu clinics, conducting an in-service for all clinical staff, residents and faculty on the importance of getting immunized, the project included five short video PSAs, letting patients know that it is imperative that they to get their annual shot. 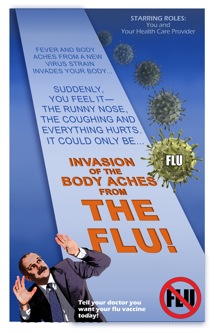 Using a theme of 50’s thriller movies and movie posters, patients were encouraged to: Get the Shot, Not the Flu, Don’t Let the Invisible Bug Get You, Don’t Let the Flu Catch Up with You, Avoid Invasion of the Body Aches from the Flu. Posters depicting the movie theme were mounted on the door of each patient room. Videos were part of the loop on the monitors in lobby and waiting area of The Family Medicine Center and The Specialty Medicine Center, to ensure that all patients were given the facts about the flu vaccine. Faculty member Eugene Wright, MD, appears on one of the videos, persuading senior citizens to get their pneumonia shot, as well.

“We know that members of our senior community are among the most vulnerable population during flu season,” said Joshua Stringham, MD, SR-AHEC resident who helped implement the grant. “The AAFP Foundation recognizes and supports creative programs which are improving the health and well-being of older people in the community.”

Funding for the grant was provided by the WellPoint Foundation, and Pfizer, Inc. In addition to receiving the grant, SR-AHEC’s residency program was also awarded a travel scholarship to present findings from their project at the AAFP’s 2015 National Conference of Family Medicine Residents and Medical Students in August 2015. Stringham reports that the SR-AHEC booth was one of the more popular areas visited during the national conference.

“We had a great time and the poster and videos were very well received,” Stringham reported from the conference. “I had two times allotted to stand by the poster with the video playing and talk to people.” He said that the majority of the guests focused on two things:  First, they loved the videos and the fact they were played on the iPad mini. Second, many people commented on how professional look of the the advertisements. He added that many of the other grant winners congregated by our poster and videos; one commented that she wish she had an organization like ours to help with her poster and project. He agreed. “Thank you all for working so well and offering your time and amazing talents toward the successful completion of this project. I am very grateful to be part of this great team,” he said after returning from Kansas City.

The last flu season showed that this common illness can be severe. North Carolina recorded 219 deaths related to the virus, making it the deadliest flu season since the Dept. of Health began tracking flu-associated deaths in 2009.

This past spring, the videos and posters were awarded first place in the national Aster Healthcare Marketing competition in the non-hospital, video series category.

Read More
Medical Education in WNC: The Next Decade

Medical Education in WNC: The Next Decade